​​​Should you be concerned your chinchilla is overweight, please refer to the section below.

NEVER feed any chinchilla food containing different coloured pieces. These "muesli" style mixes are too high in sugar, can include unsafe items such as fruit, vegetables, nuts and seeds and encourage selective feeding. They result in shorter lifespans, as well as serious health issues whilst the chinchilla is alive, such as seizures and fatty liver disease.

Unfortunately these are just some examples - sadly there are too many to list them all.

Changing to a safe pellet

Chinchillas typically eat a lot less pellets and hay than other rodents such as guinea pigs, so don’t be worried if they don’t seem to be eating lots. A healthy chinchilla will not starve themselves when there is food available, you just have to be stick with it and wait it out. If a child had never been fed anything other than chocolate, they too would refuse a balanced diet at first. However as an adult, you know that they simply cannot sustain a healthy lifestyle on only chocolate alone. Unfortunately for chinchillas the situation’s even worse than this as unlike chocolate for humans - fruit, vegetables, nuts, seeds etc are not safe for chinchillas in any quantity!

​So remember you are making this change solely for your chinchilla’s best interests - ultimately these unsafe pellets shorten lives and unfortunately the effects only become apparent when it’s too late. So don’t delay - buy those replacement safe pellets today! 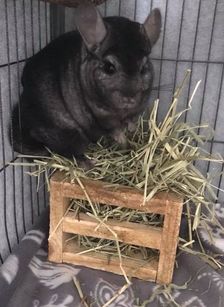 For an adult chinchilla, high quality Timothy hay should be provided in unlimited quantities. Chinchillas under 6 months and pregnant chinchillas should be fed both alfalfa and Timothy hay. You may be surprised to know that there are a variety of few types of hay available - however Timothy hay, which is a kind of hay not a brand, is the best type for adult chinchillas. If you choose, you can also feed a couple combination of other types as well, such as meadow, orchard or alfalfa (the latter should only be fed sparingly to adult chinchillas). Timothy hay, should however, make up the majority of an adult chinchilla's intake, due to the high fibre found in this type of hay helping to wear down teeth. You can place your chinchilla's hay in a separate food bowl, or just leave a pile on their shelves for them to eat.
​
Please don't use wire hay balls, racks or similar to feed your chinchillas hay. Although they may seem harmless, many chinchillas have accidentally strangled themselves in hanging hay balls or had a limb amputated after getting them caught in wire hay racks, feeders and balls.

Chinchillas should always have a glass water bottle unless their cage bars are so small there is no way they could reach a plastic water bottle. Remember chinchillas can fit their entire body through a 1 inch gap, so they can easily push their nose through a space much smaller than this to chew a plastic water bottle! In America and other countries, it is important not to feed tap water. Despite being suitable for humans, tap water often contains fluoride and chloride as well as other minerals, chemicals and even parasites that can make you chinchilla very ill over time. Instead use filtered or bottled natural spring water. In the UK, tap water is generally believed to be safe for chinchillas, however you may also like to use filtered or bottled spring water if you choose. Ensure you regularly clean the water bottle thoroughly to prevent germs and bacteria building up.

There have been devastating cases of chinchillas who’ve died, simply because their owner didn't realise their water bottle had stopped working. It can be easy to forget how long ago you filled the bottle up, or you may just assume another family member has re-filled the bottle, rather than realising it isn't working. Get into a habit of checking the water bottle is working each day when you feed your chinchillas, by lightly running your finger over the roller ball. It's a good idea to have 2 water bottles attached to your cage, as unfortunately them stopping working is relatively common.