Here is a list of some of the most frequently asked questions about chinchilla care. This is only a very brief overview, for more information on each of the topics, please follow the links to the dedicated page.

​The main disadvantages of chinchillas as pets and some of the most common reasons for re-homing are as follows:

Chinchillas generally do not make good pets for children. They are very fragile and typically  do not like to be held . Due to the size of their teeth, they also have a very painful bite if they use it. Unfortunately there have been incidents of chinchillas being squeezed to death by well intended children who did not realise they were holding the chinchilla far too tightly.
Of course children and chinchillas can co-exist in the same household, but it’s important to supervise any handling very closely and ensure your child knows to respect the chinchilla’s needs - i.e no loud shouting. You will also need to be fully responsible for the chinchilla's care, cage cleaning and expenses - pocket money will not cover these requirements.
​Therefore if you are considering a chinchilla it should be because you want one, and not just for your child.

Q. Are chinchillas easy to care for? 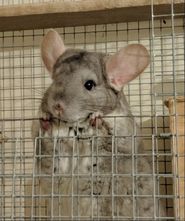 Chinchillas are not difficult to care for in terms of skill, however they are a big commitment in time and effort and can be expensive to care for.

Time wise, chinchillas require the at least 1 hour per day from you, which is in addition to their at least weekly cage out. The biggest commitment in terms of time, is supervising their daily out of cage playtime. This is very important for the chinchilla both mentally and physically, and is a direct influence on your pet's overall wellbeing.

​Other than this, chinchillas require high quality alfalfa based pellets, timothy hay, safe chews and clean water daily. Sand baths should be offered on average 2-3 times per week.

Q. What sort of cage should a chinchilla live in?

Chinchillas need a large, multi level cage, that’s totally free from any plastic as this is very bad for them. The cage must be kept indoors and be well ventilated. For this reason, vivarium/aquarium style cages are not suitable. The minimum cage size for a chinchilla is 64 x 61 x 91cm (25" x 24" x 36"), however bigger is better. Just ensure there are no drops higher than 40cm/16” in between levels, as your chinchilla could hurt themselves if they fall.

Q. What do chinchillas eat?

Q. If chinchillas in the wild ate fruits and vegetables, then why can’t pet chinchillas?

Wild chinchillas originate from way up high in the Andes Mountains, where the climate is very cold and dry. As such, very little forms of plants and vegetation grow up there, and certainly not the fruits and vegetables we’re used to! Wild chinchillas’ diet would largely consist of a mixture of dry grasses and forage. As a result, chinchillas are not evolved to eat such rich, high sugar foods and feeding them this diet which is unnatural to them can prove deadly.

Q. Do chinchillas need to live in pairs?

Chinchillas are very social animals and would always live in large colonies in the wild, so it’s best to keep them in same sex pairs if possible. However if the chinchilla you choose is currently living alone, you have the choice of whether to get a same sex companion for them.

Bonding can be a slow process and is 50/50 whether it’ll work, so if you do have a single chinchilla you need to decide if you want to commit to a second and the additional work it involved  - even if the bonding does not work out. As bonding 2 single chinchillas is never guaranteed, please do not break up a bonded same sex adult pair just because you only want one of them.

Q. Should I get my chinchilla neutered?

Neutering a chinchilla is a fairly high risk operation and so is not typically recommended as there is generally no need for it. Male chinchillas can be bonded with other male chinchillas, so there is no need to pick an opposite sex companion. In fact female chinchillas are known for being particularly territorial and have killed their male counterpart on many occasions before.

​Opposite sex chinchillas should never be kept together or allowed to interact unless both chinchillas are pedigreed and you are an experienced breeder, or the male is neutered. If you do neuter your male, you will need to wait 8 weeks after the operation to put him back in with the female. After this time apart you may need to repeat the bonding process anyway, which is another reason why same sex pairs are recommended. As with any operation, there is always the risk the chinchilla may not survive the procedure, so this is something you should be aware of if you do decide to have your pet neutered.

Q. I’d like to have baby chinchillas, should I get an opposite sex chinchilla?

No, you must not breed chinchillas unless both are pedigrees approved for breeding and you are experienced with plenty of money to pay for any complications, such as a C Section, should they arise. Only pedigree chinchillas should ever be bred as this means the chinchillas’ family lines have been tracked for any serious health conditions such as malocclusion. Breeding chinchillas without pedigree certificates is extremely unethical as you have no way of knowing what fatal conditions the parents could be carrying, even if they appear totally healthy. To knowingly bring a baby chinchilla (kit) into this world, aware of the fact it may well suffer from painful fatal conditions such as malocclusion and in turn devastate their owner, is very immoral. ​

Q. Will my chinchilla get along with my dog, cat and other pets?

Chinchillas should not come into contact with any other species, including dogs, cats, reptiles or any other rodents. Not only is there the risk of the chinchilla being injured or killed by natural predators such as your dog or cat, other species can carry bacteria that is harmful for chinchillas. Aside from cats and dogs, rabbits, rats and reptiles are amongst some of the worst culprits for this. However, any other species can be carrying bacteria that is harmful for your chinchilla, so please ensure they never interact in any way. Of course you can have chinchillas as well as other pets, but you must take precautions to ensure they don’t come into contact. Just having cats and dogs approaching a chinchilla’s cage can cause them serious levels of stress and trigger illness or even death as a result of severe shock. 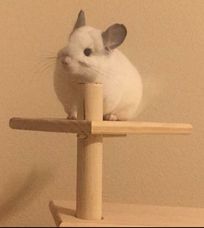 Credit: Chintopia - The Home of Mysti and Shima Hodges on Facebook
Yes chinchillas need playtime, which is a big factor you should consider before getting your pet. It is not fair to deny a chinchilla playtime just because you don’t have time for this. With personalities somewhat similar to squirrels, you should not keep a chinchilla continuously confined to a small cage. Playtime should be carried out in a secure playpen with room temperature lower than 20C/68F at least 4 times a week, for around 45 minutes per session. More is better, so if you’re able to let your chinchilla out for longer, or offer playtime every day then that’s great! Playtime should be on your chinchilla’s terms and never forced, they should have access to their cage at all times and be able to return to their cage when they want to. Playtime is allowing your chinchilla to exercise as they wish, not “exercising them”. You shouldn’t make your chinchilla come out if they don’t want to, and never ever force them to run or chase them.

Q. I heard prey animals don’t need or want any exercise, is this true?

Otherwise the same argument would justify keeping a dog permanently in a small crate, after all, pet dogs no longer need to hunt for food or go in search of a mate either! However in society we now realise this would be very cruel for a dog, and the same considerations should apply for chinchillas. Due to chinchillas not being kept as pets for as long as some other species, unfortunately means sometimes the understanding of their welfare can be behind the times in comparison. For instance rabbits used to be marketed as the perfect, cuddly companion for children and being prey animals, only requiring the tiniest of cages. Further research has since discovered that rabbits do require far more space to exercise and keeping them confined in a tiny space is not fair. The same principles apply to chinchillas - yes, provide hideouts so they feel safe and secure, but please do not deny them their right to burn off their endless supply of energy!

Q. I can’t afford air conditioning, can I use a fan for my chinchilla instead?

Sadly when it comes to chinchillas, there isn’t any substitution for air conditioning. Even in cooler countries such as the UK, air conditioning is mandatory as each Summer, temperatures will exceed 21C/70F. Fans do not reduce the temperature, they simply circulate the air in the room. Chinchillas do not sweat, so they do not benefit from any cooling sensation from the fan. Direct drafts are actually bad for them, so fans do far more harm than good. You can find where to buy air conditioning units here and check out our tips to keep room temperatures cool, helping to reduce the amount of times you need the air conditioning running.

Q. Do chinchillas get sick often? 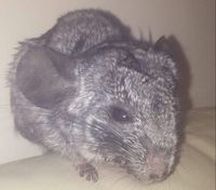 Due to irresponsible breeding of chinchillas without pedigree certificates, which means their family history is unknown, unfortunately there has been an epidemic of a very nasty fatal condition called malocclusion. This is where the roots of the teeth grow into the nasal cavity and or eye sockets, and sadly there is no cure. Chinchillas from pet shops or irresponsible breeders are more likely to develop malocclusion as the condition is mainly hereditary and they often breed chinchillas who aren’t pedigrees, so have no idea of their family history. Seizures are also another fairly common health condition chinchillas suffer with, which can be caused by poor diet such as feeding dangerous foods such as fruit, vegetables, raisins etc, as well as being hereditary in some cases.

However irresponsible breeding aside, all chinchillas can get sick or injured at any time and as they’re classed as exotics, the vets bills are expensive. Before getting a chinchilla, you should find a knowledgeable vet in your area and ensure you have enough money put aside should your chinchilla get sick.