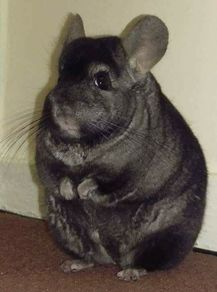 Chinchillas are quite complex by nature and they can exhibit a wide range of behaviours and sounds. They are very independent animals and it's not easy to have any real control over their behaviour, however there are some methods you can at least try to influence this to a certain extent. Understanding why they're acting a certain way is the first step, then you can look at ways to try and shape their behaviour if need be.

Please note that all the behaviours listed below are natural to chinchillas, including urine spraying and biting. Unfortunately too many owners re-home healthy chinchillas for simply displaying these natural behaviours. Had they done a bit of research before getting a chinchilla they would have known these behaviours aren't uncommon, and could've avoided the chinchilla having to go through the stress of being re-homed.

​​​Fall-outs or fights with other chinchillas

Even bonded pairs can suddenly start fighting and if biting occurs you must permanently separate before they seriously injure or kill each other. Once chinchillas have gone as far as biting, the relationship is damaged beyond repair and you must keep them in separate cages from now on.

If the fall-out is less severe and biting hasn't occurred, they may work it out among themselves. Signs of slightly less serious arguments include barking at each other, some chasing and possibly fur pulling.

However you must watch very carefully to ensure the argument doesn’t escalate to a physical level or occur regularly, as fights between chinchillas can quickly become fatal.

Distraction is a good technique so try topping up their food bowl and adding some hay to diffuse the situation.

Offer a sandbath - this provides both distraction and helps neutralise their scent, which can calm the situation. During a fall-out may be a good time to vacuum their room - the sound of this may shift their focus from squabbling to huddling together instead.

​On another note, make sure the cage is big enough to accommodate the number of chinchillas and that there are plenty of places to hide.

​The absolute minimum size for two chinchillas is 64 x 61 x 91cm (25" x 24" x 36"), however for many pairs this is still too small and more space is required to get along. If chinchillas aren't given the room to stay away from each other when they want to, then fall-outs will inevitably occur.

Providing you definitely have same sex chinchillas then mounting isn't generally a problem, unless it is excessive or distressing the other chinchilla. Mounting can be a display of dominance or a sign that the chinchilla is feeling excited or playful.

​If you have implemented all of the above, just monitor the situation carefully to ensure the other chinchilla isn’t becoming stressed or causing fall-outs to occur as a result. 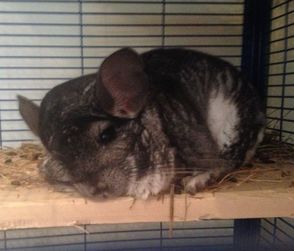 Chinchillas can bite people for a variety of reasons such as fear, aggression or as a part of grooming, and their bites can take several forms. Listed below are the 3 different types of bites, the likely reasons for this and the steps you can take to prevent it.

Please ensure you have not rushed the taming process and are holding your chinchilla correctly as per the handling chinchillas page. If your chinchilla does bite hard regularly, it's a good idea to take them for check up at the vets to make sure there is nothing physically wrong with them. Biting can be a sign that that they're in pain.

Chinchillas may nibble your hands, fingers and fingernails and may get quite rough doing this. Nibbling is actually a good sign, it is your chinchilla's way of grooming you as if you were another chinchilla.

​As nibbling is your chinchilla's way of demonstrating acceptance and affection towards you, try not to jump or make any noises that may frighten them and lose their trust. Chinchillas will not realise if they're hurting you, so if the nibbling does becomes too hard, gently move your hand away for a moment. Generally they learn the accepted level of pressure to nibble their owner with.

2. Pressure biting - holding onto skin with their teeth

The bite does not break the skin or leave any lasting marks but the chinchilla holds your skin firmly in their mouth.

​If a chinchilla is persistently pressure biting you, then they are most likely doing this out of fear or expressing their disapproval at being disturbed or handled.

It's a good idea to listen to what your chinchilla wants if they're expressing occasional urgency bites. If your chinchilla needs the toilet or is saying they've been held for too long, then return them to their cage.

Otherwise with pressure bites out of fear, dominance or aggression, first make sure you are holding your chinchilla properly and have not rushed the taming process. As long as your chinchilla is being handled gently and safely, do not react to the pressure bites - if they get the reaction they want they will keep doing it.

Instead try to calm the chinchilla by staying perfectly still and quiet, stroking them gently if they'll allow it and offering a safe treat when they don’t bite. You don’t want to offer treats following a bite, or they will think they’re being rewarded for this behaviour.

If the bites do become hard then wear thick gloves to protect yourself. Try regular, brief handling to get them more used to being held. This in combination with not reacting to their pressure biting will help teach the chinchilla there is no need to do this.

3. Hard bites - sharp, painful and may break the skin

With these types of bites the chinchilla means business, so it's a good idea to wear thick gloves to protect your skin as the bites can be pretty painful. Your chinchilla may be biting because they are scared, being territorial, or trying to assert their dominance over you.

Remember not to take it personally, your chinchilla doesn't hate you - biting is just a natural reaction that you can try and encourage them out of.

In order to discourage your chinchilla from biting, it's a good idea to try and understand the reason why they're doing this in the first place.

Why is your chinchilla biting?

There is a crossover between all the types of biting and generally occurs because the chinchilla is afraid and doesn't trust you yet. Even the dominant, aggressive chinchilla who approaches you to attack is likely to be fearful deep down that you will do something to hurt them, which is why they act this way to protect themselves. 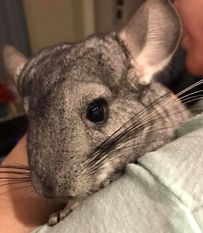 As mentioned previously, you should first take your chinchilla for a check up at the vets to make sure there is nothing physically wrong that could be causing them to bite out of pain.

Once this has been ruled out and if the biting still continues, buy some thick gloves to protect yourself. As well as stopping you from getting hurt, if you don't react when the chinchilla bites it helps them realise biting doesn't get the desired reaction. If a chinchilla has learnt that biting means they will be put back down, they will keep doing this.

If the chinchilla still continues to bite, you can try saying NO firmly, but gently to discourage them from doing it. Never shout, chinchillas are prey animals who are very sensitive to noise and easily frightened, so scaring your chinchilla will not help them to trust you and can make the situation worse.

​Help your chinchilla enjoy being held

This process can take a long time so don't expect instant results. Almost all chinchillas' biting will improve with enough perseverance, however some will always be naturally more inclined to bite than others. If this is the case, you may always need gloves when handling your chinchilla. ​

​Please remember that biting is not a reason to  re-home your chinchilla  and most certainly not a reason to have them put to sleep. Biting is a natural animal reaction and you should be aware and prepared for this before getting a chinchilla.

Females most commonly do this and it's one of the chinchilla's natural defence mechanisms. Female chinchillas have a pretty accurate aim and may stand up and spray urine at you if they feel threatened. A bit like biting, this may be due to the chinchilla feeling  scared, trying to assert dominance over you or protect their territory (cage).

Again, not reacting is key. If you immediately retreat when your chinchilla sprays urine then they'll know the tactic is working. Try to completely ignore it and continue with what you were going to do.

If the mess of the urine is a problem then you can use an old towel to protect yourself. Talk to the chinchilla calmly and offer a safe treat or some of their regular pellets or timothy hay when they do not spray urine. In time, your chinchilla will learn that your presence means positive things for them and that there is nothing to worry about.

Examine the chinchilla's environment and look for any possible causes of stress.

Noise from other members of the household, or pets such as cats and dogs can be some of the main culprits. If this is the case, keep other animals completely away from the room your chinchilla is in and ensure other family members are not shouting or being loud.

Fur chewing can also be due to boredom from not having enough mental stimulation. Make sure your chinchilla has a suitable sized cage with safe places to hide, plenty of items to chew and gets daily playtime.

As fur chewing can be hereditary as well, some chinchillas will still do this even if they have plenty of mental stimulation and aren't kept in a stressful environment. However as with any fur chewing, you must first examine the chinchilla's environment to rule out that this isn’t part of the cause.

You may be handling your chinchilla incorrectly or rushing the process when they are not ready. Take note of the advice on handing chinchillas. Remember taming and getting them used to being held is not usually a quick process

Some chinchillas will repeatedly chew on the bars of their cage, which can be noisy and particularly frustrating if their cage is near to where you sleep. This may be due to boredom, trying to get your attention or just that the bars seem like an appealing item for to chew! 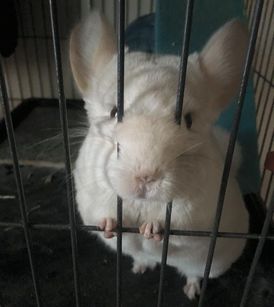 Make sure you don’t accidentally reward this behaviour, by responding with a treat, attention or letting them out to play as a result. Chinchillas learn quickly and otherwise they’ll soon start chewing on the bars constantly until you give in!

Instead make sure there are plenty of safe items in their cage to chew instead of the bars. Ensure the chinchilla is let out for playtime regularly, a chinchilla safe wheel in the cage is also the perfect toy to use up some of that endless energy!

​If a chinchilla still chews their bars when you have tried all of the above, then you can place some seagrass mattresses or non pill fleece around the bars they chew to prevent them from doing this.

Chinchillas can make a variety of sounds to communicate how they’re feeling. Some chinchillas are naturally more vocal than others - some may bark regularly whereas others remain almost always silent.

Vector Graphics with thanks to Freepik